ORCHARD PARK, N.Y. — After a sudden and frightening collapse on the field Monday night, Bills safety Damar Hamlin remained in the intensive care unit and in critical condition on Tuesday at UC Medical Center in Cincinnati. But only hours after the Bills returned from Cincinnati their fans took it upon themselves to continue showing support however they could.

First, they spearheaded donating to Hamlin’s The Chasing M’s Foundation Community Toy Drive, which was up to nearly $5 million Tuesday thanks to donations from around the world. Then Tuesday afternoon, fittingly at 3 p.m. for his jersey number, more than 100 Bills fans came together in the parking lot outside Highmark Stadium in a collective prayer for Hamlin and his family.

Jill Kelly, the wife of former Bills quarterback Jim Kelly, walked around the crowd hugging and thanking those who attended. She was one of four who delivered an impassioned prayer to the gathered crowd.

Bills fans holding a prayer vigil for Damar Hamlin and his family outside Highmark Stadium here in Buffalo. pic.twitter.com/pjXqj7eP3k

The crowd included fans, her two daughters, some stadium workers and team chaplain Len Vanden Bos. The group came together with the “Pray for Damar” message on top of his jersey number, displayed on every gate outside the stadium.

Jill said when Jim woke up this morning, he said, “I don’t feel right. I’ve never felt this way before. I’ve seen so much on the field. I’m really scared.”

“A lot of people are going through a lot of difficulty, a lot of sorrow and a lot of heartbreak,” Jill Kelly said after the prayer. “I feel like last night, what happened to Damar just brought all of that to the forefront again in that we do need to rally. We are a community. It’s not just Bills Mafia. Bills Mafia is incredible, and the NFL as well. It’s the greater community of humanity. We saw that last night. We have to do something about that.”

Although no current players were in attendance, one prominent Bills alumni group member stayed in the background throughout the prayer. Former Bills running back Thurman Thomas and his wife Patti, who jointly raised $50,000 last week for the Christmas blizzard recovery in Buffalo, were both in attendance to show their support for Hamlin. 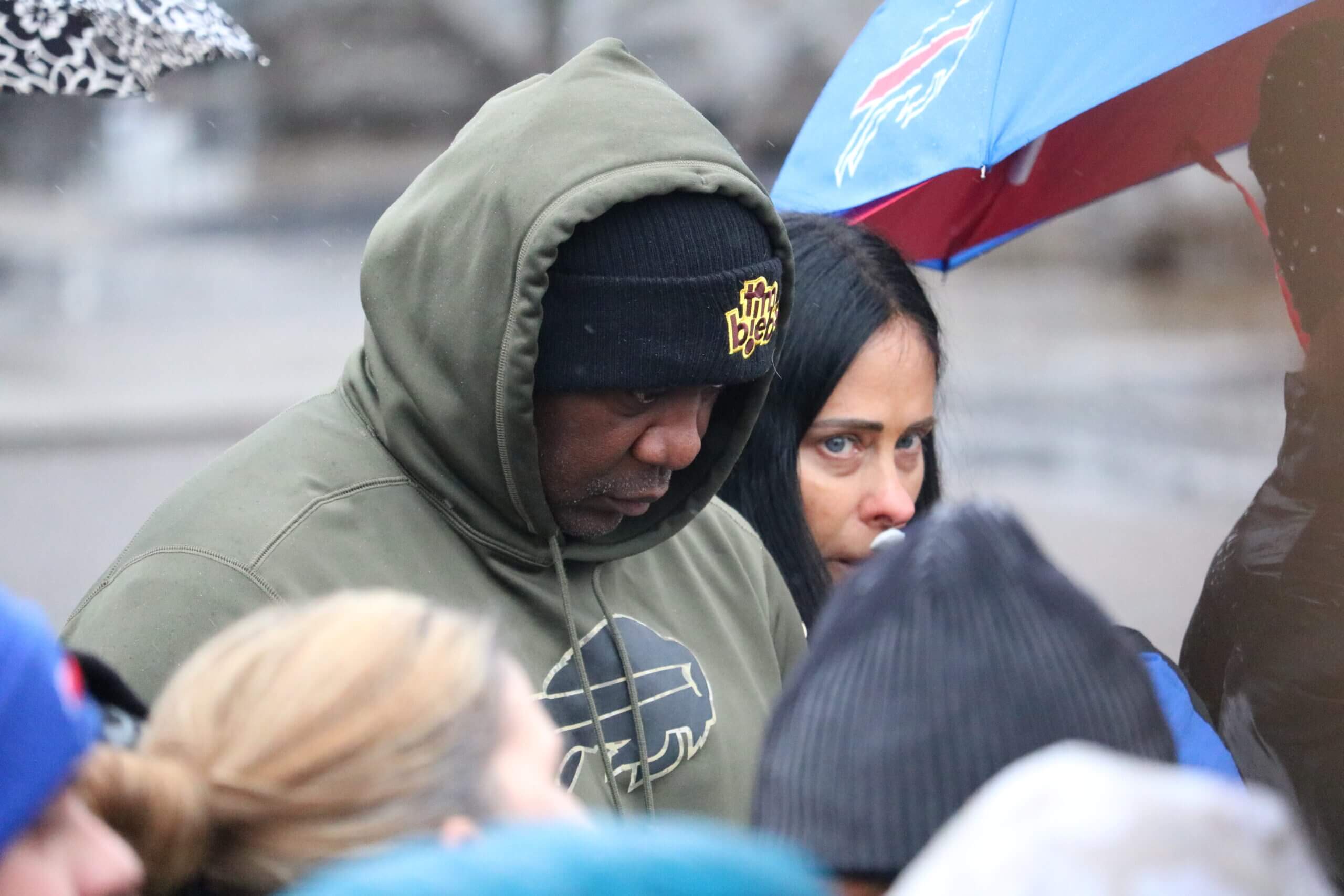 But fans helped spread the word about the event for Hamlin, including co-organizer Lydia Dominick and 26 shirts founder Del Reid.

“It’s an opportunity for us to join together, and just to lift him up and be a show of support to a family,” Reid said. “As Bills fans too, this isn’t about us, but at the same time, we’re all feeling something here, too. So, we can encourage each other too, as well.”

Reid, like so many fans watching on television, sat in horror as he and his wife saw Hamlin collapse. And then, as the rush of information rolled in on Twitter about first responders needing to perform CPR after Hamlin suffered from cardiac arrest and how distressed players were on the field, Reid and his wife were brought to tears.

The shared emotions among the fan base brought on feelings of community, a sense of duty and wanting to show support. And it led to an instant yes from Reid when Kelly initially reached out about the prayer gathering for Hamlin.

An outpouring of support for Hamlin continues across the sports landscape and beyond as he remained in critical condition. The lights at Paycor Stadium in Cincinnati were lit in Bills colors in honor of Hamlin on Monday night. Video boards outside the gates at Highmark Stadium read “Pray for Damar.” All 32 NFL teams have honored Hamlin through their Twitter accounts.

Steelers head coach Mike Tomlin, speaking less than five miles from Hamlin’s hometown of McKees Rocks, Pa., said, “It is a really personal thing for me, being a Pittsburgher, and that young man being a Pittsburgher. I’ve known that guy probably since he was about 12. Just got a lot of respect and love for him as a human being. … It’s just an honor to get to know young people like that. I’ve had an opportunity to express that to him whenever I see him. … I’ve got a lot of love for that young man.”

Pat Narduzzi, Hamlin’s college coach at Pitt, said, “Damar Hamlin is far more than just a football player. He’s a loving son, brother and friend. Damar is a hero to thousands of Pittsburgh kids. Damar, we love you. We are praying for you. Pittsburgh’s always had your back. And now it’s obvious the entire country has your back, too.”

No comments to show.