Lionel Messi versus Cristiano Ronaldo — who, in footballing terms, is the GOAT (short for Greatest Of All Time)?

That debate will never be settled conclusively, but those in the pro-Messi camp were given a huge boost last month when he lifted the World Cup and was also awarded the Golden Ball as the tournament’s best player. Ronaldo’s chances of ever winning the World Cup look over after Portugal made a quarter-finals exit. He will be 41 years old by the time of the next tournament, in the summer of 2026.

When it comes to commercial pulling power and position as a global brand, though, it’s Ronaldo — the most followed person in the world on Instagram — who has long held the advantage. The extrovert Portuguese forward, with his model-like appearance and chiselled physique, has always had an edge over the introverted Argentinian counterpart Messi, who with his short stature and shaggy beard does not always look like an elite athlete.

After Messi’s crowning glory in Qatar last month, though, the sands may be shifting in the favour of the 35-year-old, who relies heavily on his father Jorge and elder brother Rodrigo to handle his commercial arrangements. Many other top players employ more conventional agents and agencies, but Messi chooses to keep his circle small, with people he can truly trust.

Messi is busy benefitting from a huge number of commercial deals while Ronaldo has just made a hugely lucrative — if not especially competitive in football terms — move to the Al Nassr club in the little-watched Saudi Arabian league after forcing a mid-season exit from Manchester United.

The Athletic spoke to experts and analysed social media data to assess how ‘Brand Messi’ has exploded like never before since that thrilling Sunday night in Doha’s Lusail Stadium a week before Christmas.

“What Messi has done that separates him from Ronaldo is he won the World Cup and was the star performer in what most people would agree is the greatest World Cup final of all time,” says Tim Crow, a sports marketing expert. “That lends you immortality.

“Most people would agree that Messi has gone to a level beyond Ronaldo.”

Others may disagree in football terms, while in commercial ones there is still a very good case for Ronaldo as the No 1.

“Ronaldo has positioned himself well in key territories,” says Adrian Wright, director at agency Sporting Group and formerly the marketing director at English side West Bromwich Albion, citing Ronaldo’s club career in Portugal, England, Spain, Italy, England again and now Saudi Arabia. This means he is well known not just in those countries but also in places where games from their leagues are shown on TV.

“Ronaldo has appealed to the Asian market and has a lot of followers from the subcontinent,” Wright says.

Though Messi’s role in one of the best club sides ever at Barcelona made him a global superstar (Spain’s La Liga is very popular around the world), he has not had the same TV exposure in the last two seasons as Ronaldo — especially since a summer 2021 move to play for Paris Saint-Germain in France, as its Ligue 1 top flight does not get nearly as much coverage globally as the Premier League.

One aspect where Ronaldo certainly seems to be the GOAT is in the size of his online audience. He is the most-followed not just footballer, nor athlete, but person in the world.

Ronaldo has 529 million Instagram followers to next-best Messi’s 415 million. Next in the rankings are US reality star Kylie Jenner, actor and singer Selena Gomez and wrestler turned actor Dwayne ‘The Rock’ Johnson.

Analysis carried out by website SocialBlade shows Messi did attract more Instagram followers than Ronaldo during the four weeks of the World Cup, but perhaps not by as big a margin as one might imagine when one won the tournament while the other got benched as his country lost in the last eight — he gained 30 million, Ronaldo 20 million.

Crow says such raw numbers are not always the most useful metric when assessing a player’s commercial pulling power.

“Anyone who’s advised brands on these deals knows that is one part of the equation,” he says. “Brands take these numbers with a huge pinch of salt because a lot of these numbers are bots (inauthentic accounts).”

Digging deeper into the data suggests a more nuanced picture than a simple win for Ronaldo.

First, Messi has posted on Instagram significantly less often than Ronaldo, meaning he gets more followers per post.

Also, the Argentina captain has a far higher “engagement rate” — the number of likes or comments on recent posts — than his Portugal counterpart, although this may be skewed by what recently became the most “liked” Instagram post ever.

Footballing ability is not all it takes to build a global brand, with companies and consumers wanting to have an idea of the player concerned as an individual and personality.

Somewhat unusually for a truly global celebrity, Messi does not speak English. Ronaldo does, helped by over seven years at Manchester United in two spells over a decade apart, becoming fluent in what is the commercial world’s lingua franca.

Messi already had one of world sport’s most recognisable faces but his profile has increased further as a result of billions seeing him lift the World Cup last month in what he said would be his fifth and final attempt at doing so having turned 35 in the summer, and he now advertises companies ranging from video games to cryptocurrency exchanges.

Both players have been involved in controversial deals.

Messi is a tourism ambassador for Saudi Arabia, a strange position for him given the Gulf state is competing against Argentina to host the 2030 World Cup, while both have heavily endorsed cryptocurrency products such as fan tokens — many of which have crashed in value since launch.

Special investigation: Socios ‘fan tokens’ – what they really are and how they work

Whatever the rights and wrongs of those agreements, it is clear both are reaching the peaks of their commercial powers long after they were at their most potent as footballing forces.

Simon Chadwick is professor of sport and geopolitical economy at the French-based SKEMA Business School. He uses the term “revenue-harvesting” to describe how Messi and Ronaldo are constantly promoting new products as their careers reach the end.

“For mere mortals like us, you’re looking at a future where your salaries go up and up (through your working life). But for any footballer, your salary is not going to go up anymore, it’s going to go down,” he says, arguing both players are chasing “one last payday”.

“Ronaldo was revenue-harvesting long before Messi ever started,” Chadwick says, describing the lifestyle and image the Portuguese has created for himself. 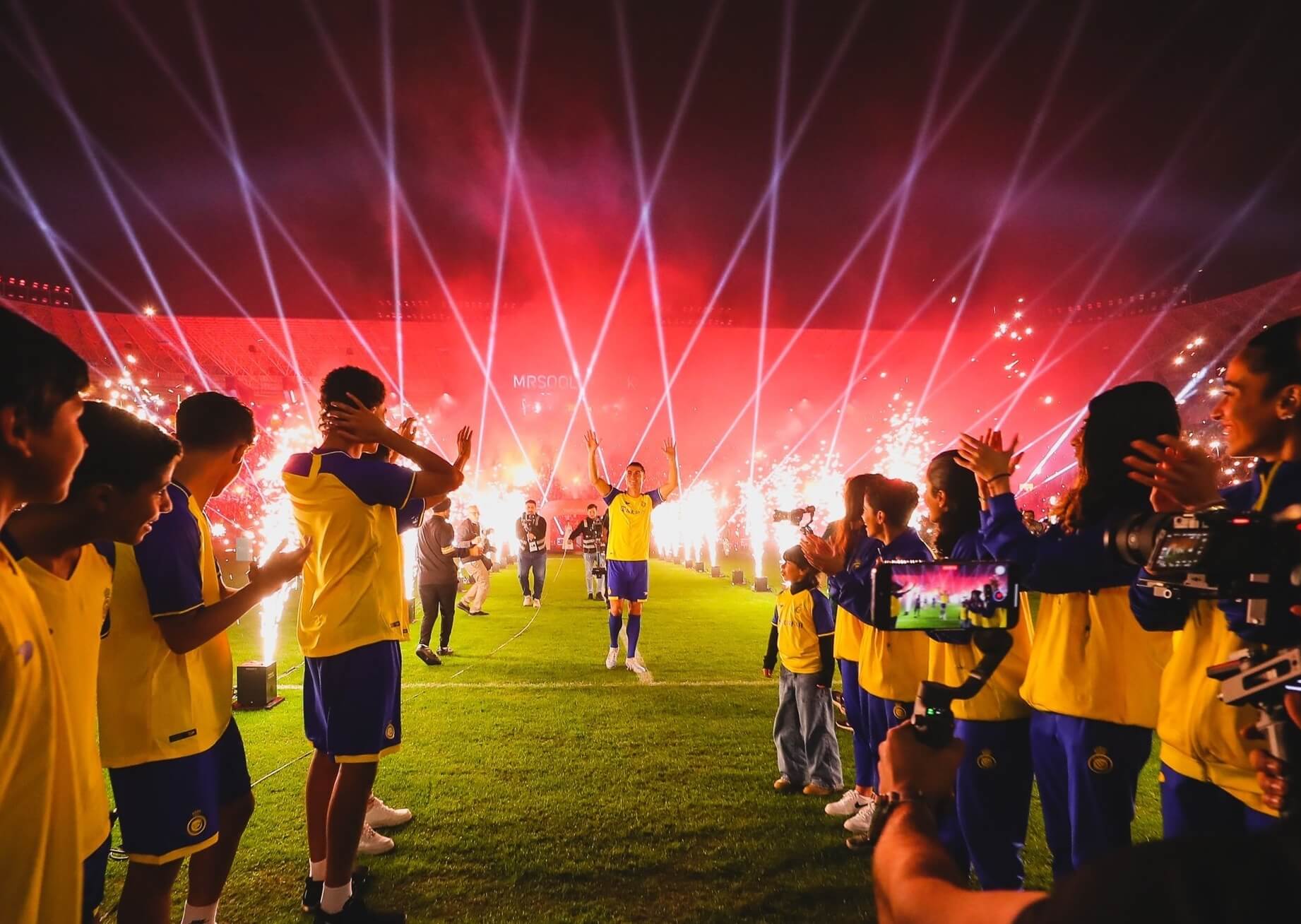 Cristiano Ronaldo made his first appearance in an Al Nassr shirt – albeit not in a match – at a media event this week (Photo: AL Nassr Club of Saudi Arabia/Anadolu Agency via Getty Images)

When Ronaldo’s record-breaking transfer from United to Real Madrid was confirmed in the summer of 2009, he was partying in Los Angeles with actress and socialite Paris Hilton, who was one of the most famous people on the planet at the time. Rumours have swirled ever since that the whole thing was stage-managed for marketing purposes.

Messi has always had an image of a more low-key family man, frequently posting photos with his wife, Antonela Roccuzzo, who comes from his hometown of Rosario, where life moves at a lesser pace than a three-hour drive away in capital city Buenos Aires, and their three young sons Thiago, Mateo and Ciro.

“Messi’s trajectory has been a long, slow upward one,” Chadwick says, “but Ronaldo’s has been to reach a peak, realise you can’t stay young and sexy forever, and realise the nature of your brand has to change.”

Chadwick says in recent years Ronaldo has tried to cultivate more of a family-man image, posting about his partner Georgina Rodriguez and children, rather than the one of the hyper-masculine playboy who always whipped his shirt off after an important goal to reveal a rippling, gym-honed physique.

He cites Ronaldo’s United and Madrid predecessor David Beckham as an example of a football star who has aged gracefully, in the sense of his commercial branding position, if not in the eyes of some through his curious role as a highly paid ambassador for the Qatar World Cup, staying silent on the many controversies surrounding the event.

“At one point (Beckham) is appearing in his Armani boxer shorts. Five or 10 years later, he’s got an endorsement deal with (UK department store chain) Marks & Spencer,” says Chadwick, highlighting the transition from an upmarket “sexy” brand to one associated with a rather unglamorous middle-class lifestyle.

“The other comparison I’d make is (tennis great) Roger Federer. For a long time he was the face of Nike, but then he left and went to Uniqlo.”

Chadwick describes this as a “shrewd move”, with Federer leaving Nike just as his position as the world’s best player was under threat, and signing up with a more everyday clothing brand just as he was showing off his second set of twins with wife Mirka.

It remains to be seen how Messi and Ronaldo will manage the next 10 years in which they will undoubtedly still be global superstars following their retirement but not quite to the same extent, and without a huge club salary.

Although his tax affairs in Spain have put him under the microscope, Messi has seen little in the way of controversy compared to Ronaldo.

Messi has always been keen on earning more and more money though, and his ever-increasing salary at Barcelona played a role in the acrimonious split which led him to join Paris Saint-Germain.

He has earned around $1.8million (£1.5m) each for six different sponsored Instagram posts since the World Cup final on December 18, totalling $10.6million (£9m), according to marketing agency Hopper. These have included promotional posts for video game Call Of Duty, Budweiser beer and a cryptocurrency exchange called Bitget.

Though this is all hugely lucrative, it pales in comparison to Ronaldo’s reported £177million a year ($214m) salary at Al Nassr — far more than what Messi is paid by PSG.

It is still possible, of course, that Messi, more than two years younger than Ronaldo, makes one final big-money move — most likely following in his long-time rival’s footsteps to the Gulf or, as Beckham did, to Major League Soccer in the United States.

One question which comes to mind on the topic is: what is the point of all this?

When someone has already amassed more wealth than most people could even conceive of, why bother grafting to make more cash they will never be able to spend?

But even if somebody is very wealthy, it is hard to turn down the opportunity to make millions of dollars by agreeing to send out a simple social media post. Furthermore, figures such as Messi and Ronaldo are surrounded by large entourages, who are all financially invested in squeezing out every last drop of possible revenue.

But marketing expert Crow says that the opportunities to amass commercial riches that come with sporting immortality carry risks too.

“(Messi) will have no shortage of people who want him to lend his brand to them,” he says. “People felt uncomfortable with Pele lending his brand to (sandwich chain) Subway.”

Pele was also mocked for advertising erectile dysfunction medication (though later said he was proud to help break the “taboo” surrounding the treatment). He also sued Samsung, alleging that the electronics firm improperly used his likeness, though it is unclear whether the case was settled.

Whatever Messi and Ronaldo and their people have planned for the future, one thing is clear for these two superstars at the end of their magnificent careers: when it comes to making money, there is no time like the present.

No comments to show.